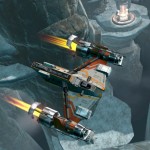 I certainly welcome our new startfighting overlords! I did get a chance to try out the Galactic Starfighter expansion in the close beta over the past couple weekends. With the NDA lifting this morning I figured I’d take this opportunity, along with everyone else that was in the beta, to write up my initial thoughts.

Here are the key ideas and impressions that I think are useful when looking forward to what we have coming:

That’s plenty for initial impressions. I’ll see about adding notes on specific topics over time and am certainly happy to answer any questions I can on what I’ve seen so far. I’m sure we’ll cover it on the SWTOR Escape Pod Cast as well.

Looking forward to it!

BioWare – Best Support in the Multiverse