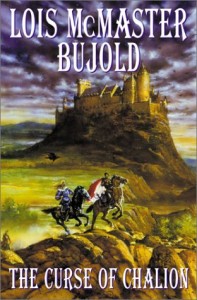 In the “Wrap-Up” I’ll post my notes on the entire book as a sequel to the introduction post which you can find here.

While we get early glimpses into the potential hero lurking behind the broken façade that Cazaril shows, it isn’t for quite some time that we get any major unveiling of how he might develop. Lois McMaster Bujold spends significant time hammering into the reader the broken nature of Cazaril’s body if not his spirit as well. As I mentioned in the introduction, I appreciate a somewhat hamstrung protagonist when done well, and it is done pretty well here, but the author spares no opportunity to illustrate Cazaril’s weaknesses. I think I prefer the slightly less destroyed yet still interestingly constrained protagonists such as Mile Vorkosigan, Lois McMaster Bujold most well know creation, or The Gunslinger.

The Lois McMaster Bujold also keeps us waiting for development of the magic/religion for quite some time. It isn’t until Cazaril’s successful use of “death magic” that both Cazaril’s power and place as well as the very real power of the 5 gods comes together and makes it’s way into the novel.

From there the journey of “Saint” Cazaril (some aspire to sainthood, some have it thrust upon them) provides an excellent vehicle for the author to play around with the ideas of gods, religion, fate and free will. I found this quite interesting and as entertaining an aspect of the book as the base plot elements.

Umegat is a great character and becomes a very useful tool in exploring these themes as Cazaril uses him as a sounding board for his questions about the gods and sainthood. As Cazaril starts to learn just how far back it seems his path had been set the concept of fate and free will are tested. I liked the idea that fate and free will might be able to coexist by offering the fated path to many, many “Cazarils” but only coming to fruition when individuals exercise free will to choose each step on the path.

Overall, I enjoyed the second half of the book quite a bit more than the first, but I expect that is by design. I liked the small bits of theater like the choosing of the mules or the interaction with the crows just as much as the large plot elements. And while the “happily ever after” ending for Cazaril was a bit overdone I was fine with it.

Finally, the intertwined story of Lady Ista and Cazaril’s final prophetic “blessing” on her create the right amount of interest and setup to launch Paladin of Souls.

Let me know your thoughts!